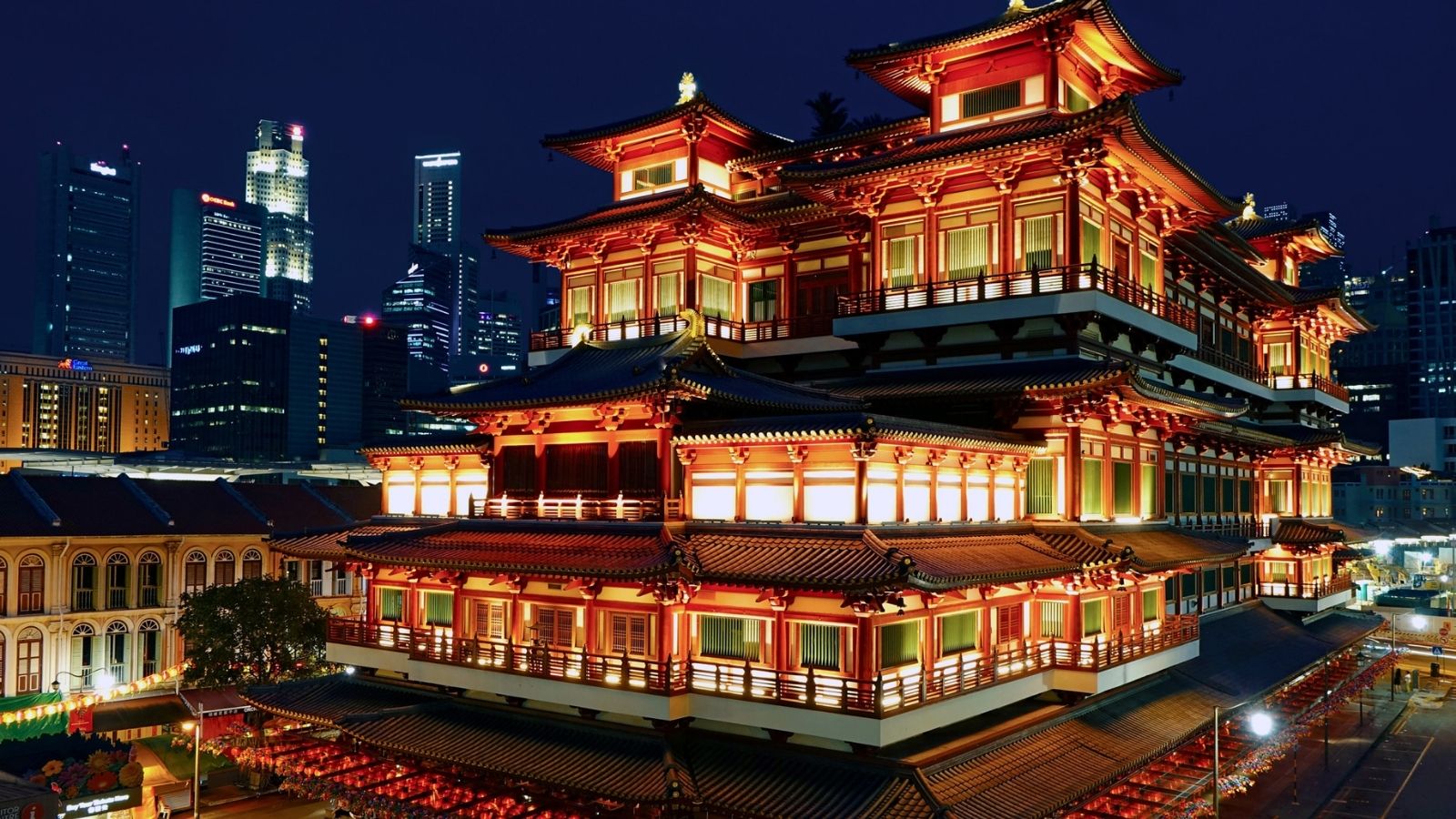 The Burmese Buddhist Temple was founded in 1875 by a Burmese gentleman U Thar Hnin. The current location is a relocation of a much smaller temple previously at 17 Kinta Road.

In 1898, Master XianHui and others stopped by Singapore on their return journey to China from Burma and he accepted the invitation from Low Kim Pong to build the monastery on 38 acres of land donated by him. The Dharma hall located in the backyard was the first hall to be constructed. The Zhu Lin temple was added for the stay of his mother, sister and cousin who were named Venerable Ci Miao, Venerable Chan Hui and Yue Guang respectively.

Over the decades, the monastery has expanded in the construction of many buildings including Mahavira Hall (1904), Hall of the Celestial Kings (1905), Sangharama Hall, Hall of the Patriarch, a nine-storey high Dragon Light Pagoda, abbot’s residence and meditation hall.

The monastery is the most complete form of Cong-lin style Buddhist monastery outside China. In addition, its combination of Hokkien architectural styles from the Chinese counties of Fuzhou, Quanzhou and Zhangzhou makes it unique in terms of architectural design.

In 1971, the Singapore Tourism Board (STB) proceeded with the plan of the Suhang Garden, which proposed to classify Shuang Lin Monastery as a tourist attraction.

Wat Ananda Metyarama is the oldest Theravada Buddhist traditional temple in Singapore. It was completed in 1925 with a land area of 18,317 sqft. Formerly located at 83 Silat Road, it has been relocated to Jalan Bukit Merah later on. In January 2013, the new temple building was officially declared open by MP for Tanjong Pagar GRC, Senior Minister of State for Law and Education Ms Indranee Rajah. The total construction cost is about S$6 million, which house the monks’ abode, Dhamma Hall and Meditation Hall, cultural centre (museum), Dining Hall and rest area (open for public)

The temple was founded by Thailand’s Venerable Luang Phor Hong Dhammaratano (Phra Dhammaratano Bandit) when he came with his disciple to Singapore in 1920. Upon noticing that there isn’t a Theravada temple in Singapore at that time, they aspired to build one.

In 1979, a pagoda and three residential blocks for the monks was constructed. The pagoda was officially declared open by HRH Princess Maha Chakri Sirindhorn, the second daughter of King Bhumibol Adulyadej on 28th June 1985.

During the year of 1995, a golden Kwan Yin (Bodhisattva Avalokitesvara) Shrine and a new porch was constructed.

The temple carries out some activities like daily praying, Vesak Day candle offering, Sunday Dharma classes for children and many more. Do check out their website for more information.

This temple is dedicated to Buddha who is also known as Sakya Muni. It was founded by Venerable Vutthissara, a monk from Thailand. In 1927, originally just a wooden structure, the temple was rebuilt with funds donated by devotees, and Aw Boon Haw and Aw Boon Parr, a pair of entrepreneurial Hakka brothers. The buildingis reminiscent of a Thai wat (temple) as it features a stupa and a Thai-style roof.

It is also known as the “Temple of a Thousand Lights” for the many lights surrounding its 15-metre Buddha statue which depicts Buddha’s posture when he attained enlightenment in Bodh Gaya, India.

It started well before 1962 when late Jao Khun Wijaranyanmuni (Jao Khun Khron, 1976-1962), the late chief abbot of Wat Uttamaram (also known as Wat Bang Saet) in the village of Bang Saet, Pasir Mas, Kelantan. He was the former chief monk of Kelantan and the first known monk in Kelantan to have received the monastic title of Jao Khun (though he passed away 15 days before he was to receive the ceremonial fan of office from King Bhumiphol).

Hai Inn Temple stand unassumingly on top of a hill, amidst the serenity of the greenery. It is located in the outskirts of Choa Chu Kang, near the exit of Kranji Expressway (KJE).

Hai Inn Temple has a humble beginning; from mud huts to its current majestic building. The efforts was made possible by a well-known pioneer businessman, Mr. Tan Fang Swee who generously donated a piece of land and Mrs Tan, Madam Yeo Tong Ho, who enduringly raised funds to commence the construction of the Hai Inn building.

The temple was built around 1928, during that time, Hai Inn Temple was comprised of numerous mud huts to provide shelter against inclement weather – a place solely for female laities and devotees to learn and practice dharma.

Hai Inn Temple house the largest Brahma Bell in Singapore, which weighs 7 tonnes, with a height of 2.75m and 1.7m wide, consecrate in year 2003.

Beeh Low See Buddhist Temple was a temple with more than 70 years of history in Singapore. The historical temple was a former old folk home called “Triratna (Three Jewels of Buddhism) Old Folk Home”, founded in 1935 by monk Xue Shan to look after many homeless old folks.

The temple is located in the centre of Singapore and covers a huge area of about 120,000 square feet. It is surrounded by beautiful surroundings, convenient transportation, complete facilities, and full of incense.

One of the notable histories of this temple is during the Japanese army occupation in Singapore, two bombs were dropped on the site. The surrounding facilities were destroyed but only the temple remained intact. This became a refugee for many of the residents and it played an important role in providing medical care to the injured civilians. Years after, the venerable decided to expand the temple and changed it to its current name – Beeh Low See Buddhist Temple.

The Singapore Buddhist Lodge was opened on 16 July 1933 with the aim to promote Buddhism and scriptures circulation in Singapore. After a series of preparation, the temple was officially opened o 17th June 1934.

Since its establishment in 1934, the temple has changed several locations and expanded numerous times. In 2014, on the 80th anniversary of the temple’s found, late former chief Li Muyuan started the reconstruction of the main hall. The design of the main hall is a combination of oriental and western ideas, with the exterior decoration adopting the traditional “swallow ridge” stacking and cutting process of southern Fujian, China.

The land that the temple currently resides in was donated by late trustee Zheng Jintai’s mother back in 1919. The temple was initially very small in size, surrounded by coconut plantation. In 1972, the temple underwent renovation and further expanded in 1988 as the followers grew. The temple held an inaugural ceremony on the 2nd of June, 1991.

Entering the temple you will see the impressive statue of Cundi Bodhisattva. The eighteen arms of the Bodhisattva represent the eighteen merits of attaining Buddhahood. There are the eighteen uncommon qualities and her arms are the symbolic expression of these secrets, endowed with the significance of profound principles.

The founder of the temple was Master Lee Nan Shan, who also founded the Kwan Im Thong Hood Cho Temple in Waterloo Street.